– The general director of VoenFilm studio, the well-known actor, director, TV host and producer Igor Ugolnikov came to the Ilyinsky frontiers on a cold October day to take part in the Memorial Day of the Podolsk cadets and continue collecting documents and testimonies in preparation for the epic film about the heroes of Maloyaroslavets land.

Recall that the initiators of filming were ordinary people, and the film itself is called the “People’s Project”. For work on it was taken by “VoenFilm” studio and personally its head Igor Ugolnikov. On the future film, which will continue the heroic military series of the “Brest Fortress” and “Battalion”, we talked with him in the walls of the “Ilyinsky Borders” museum.

– Igor Stanislavovich, at what stage is the preparation of the filming? Is the script ready?

Work on the script is still in progress. Fundamentals for future work, scenarios, we will read on October 16, the day of the last battle of the cadets, in Strelbitsky’s office (Colonel I.S.Strelbitsky, commander of an artillery school, commanded by artillery at the borders) in the former Podolsky artillery school, and now the Central Archives of the Ministry of Defense.

We’ve been there already, we received unique documents about the Podolsk cadets and it was there where we read the script. The work will continue. I hope that by February (2018) we will already have an approved version, and we will start preparing for the shooting.

In cinema, one can never say that everything will happen in this way, but we have the desire to achieve the correct schedule and production plan and in the end of August, September-October, work here, on Ilyinsky land. And we want on October 16 to shoot the same fight here, on the spot. It is clear that it will be difficult to do on the Warsaw Highway, but in twenty minutes drive, in Medyn, at the former DOSAAF airfield, we want to build a part of the Warsaw highway, part of the village and the pillboxes and shoot.

Yesterday I already saw the casting, because a month ago we announced it in an open lesson in Obninsk. We already received and keep receiving a large number of applications for the site of our people’s project. There are several unique guys who sincerely wrote about why they wants to be in it and why it is so important to them. I think that together with professional actors the residents of the Kaluga region, and Podolsk will be casted. It is important.

– How much will the historical reliability be observed?

– In two films that were made by my group, we achieved this reliability. Moreover, it was not difficult to do this – all the episodes of the defense of the Brest Fortress are well known. In this case, we know very little, although even now, thanks to the people who are doing this, the initiators of the “people’s project”, the search engines, it is already clear, for example, how the pillbox of Aleshkin died. We were there today and found out that during the clearing of the territory around the pillbox we found shells – as if Aleshkin himself had left them to us.

With the pillbox of Aleshkin, a unique situation is connected: a computer game called “World War II” has been created, and for some reason it can only be played for the Germans. There is an episode when you need to get close to Aleshkin’s pillbox, throw a grenade and thereby destroy it. Question: How many times should Aleshkin perish again? Everyday. This is monstrous, and it’s not a computer game, but the fact that we are obliged to make this film not only reliable, but also heartfelt. This is our address to children. For them, this film is being made.

– For what audience will the film be made?

– It is for a young spectator who goes to the cinema. The message of the film is for him. And we will conduct the shooting with a different technology, than we did with “Brest Fortress” and “Battalion”. We will try to shoot in such a way that the viewer feels like he is inside the events, inside the pillbox, among the cadets.

– The film crew consists of those who worked with you on the “Brest Fortress” and “Battalion”?

– Basically – yes. But there will be another director. It’s my principle – on each new picture to work with a new director, so that the films are unlike each other. This is some kind of experience that you get with every new film. But, of course, as on the rest, there will be my author’s dictate on set. As a co-author of the script, I will bring it to the end, to the final version. And also manage the shooting and editing.

– Will you add the lyrics to the script and who will become the protagonists of the film?

– In the movie, of course, the lyrics should be, but this is not the main thing. The main characters are Smirnov (General V.A.Smirnov, commander of the Podolsk cadets, head of the infantry school), Strelbitsky, Aleshkin, Musuridze. But there will be heroes whose names are not known to us now, but they will appear in the process of working with materials.

– Are they played by famous actors or novices?

– How is the film financed?

– Now the money is being collected by the initiators of the “people’s project”, and I am very grateful to the group headed by Oleg Komissar – the group of the national film project “Last Frontier”. We need to write a script and come up with a proposal to the Ministry of Culture of the Russian Federation, the Military-Historical Society. Here, my producer experience will be applicable. In my films I try and will try to make every ruble visible on the screen. That’s why I shoot a relatively small budget in relation to the pictures of my colleagues. This will be a combination of the national film project and the state, investors, distributors.

– Do you want to use the same restored search engines pillboxes during the filming?

It’s impossible. Moreover, the technology of shooting implies that the pillboxes will need to be shot from all sides, dismantled, collected. Serious pyrotechnics will be used. Therefore, we will build exact copies, but at the former airfield of Medyn. I think that there will most of the crew stay during the filming. In a year from now, on this day on this earth, we will begin shooting the film. This is also my personal task – in the regiment of the people’s militia, which built the pillboxes, my grandfather also served. After that, he disappeared without a trace, exactly here, on this earth. And for me it is important that our children remember this feat.

… At the rally at the Aleshkinsky memorial movie group “VoenFilm” was given a special gift. The commander of the detachment “Ilyinsky patrol” handed over to the filmmakers a container with the personal belongings of cadets of machine-gun pillbox 21 to the museum of the film studio. According to Igor Anatolyevich, who accepted the gift, when you hold such an artifact in your hands, you understand that human destiny lies in your hands. 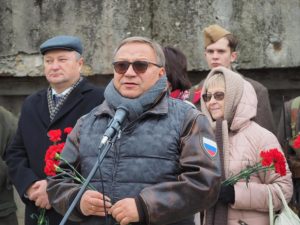 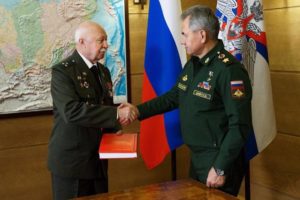 09.11.2017
The Ministry of Defense Central Archive documents dedicated to the heroic deed of cadets at the Ilyinsky frontier were handed over to the head of the Foundation Vladimir Bezugly by Sergei Shoigu
Learn More
Got information?
If you have information about the exploits of the Podolsk cadets, write to us
Write a letter