01.09.2017
The casting for the movie about Podolsk cadets is open
All news

The film will be devoted to the feat of Podolsk cadets. Producer of the national film project “Last Frontier” is a famous actor and director Igor Ugolnikov. He shared his ideas about the future film with the youth today and announced the casting of the actors. Prior to the meeting Ugolnikov together with the guests took part in a rally at the Monument to Podolsk cadets. Details in the report of the correspondent of TV “Quartz” Yevgeny Orlov.

More than 300 people gathered at the rally of memory: schoolchildren, veterans, public figures. There were guests from the Kaluga region.

It was on this day, October 5, 1941, from the artillery school located nearby that the cadets went to the front along the Warsaw Highway. On this road the eyes of three young fighters embodied in the monument are turned.

“On this day in all educational institutions of the city of Podolsk, at enterprises and organizations, events are held that are aimed at preserving and passing from generation to generation the memory of the immortal feat of the Podolsk cadets”, the head of the city Nikolay Pestov said.

The participants of the rally laid wreaths and flowers at the foot of the monument, a tradition that will never lose its significance.

The feat of cadets was also recalled by the “Peace Lesson” in the House of Officers of the Central Archive of the Ministry of Defense. In the foyer an exhibition of unique documents related to the protection of the capital was launched. For example, this is the original map of the Barbarossa plan. To receive it, a special operation of intelligence services was conducted. There are also operational summaries of the headquarters of the “Center” group, combat logs. They show the plight of our fighters.

Copies of the unique historical material were handed over to Igor Ugolnikov. His studio “Voenfilm” became the general producer of the national film project “Last Frontier”. Now we are working on the script – its a long and painstaking process. The author team is studying the archives. The task is to make the film as authentic as possible. Even shooting will take place at the same time and in the same places where the events unfolded. On October 5, they will start from the stage, when the cadets leave the gates of their schools. Very surely the last fight will be shown, because it is logged in detail. On October 16, a detachment of 14 German tanks with an assault force was able to break into the rear of the cadets. The Nazis counted on the trick, fixing a red flag on the first tank, but their trick was revealed.

“They are pulling their 45s out of the pillboxes, which are aimed at the western borders, and they destroyed 12 tanks in 40 minutes. The two fronts went ahead, but returned, realizing that the column had stopped. And these two tanks were destroyed by grenades. There are photos. Each tank is photographed on the spot where it was hit. This gives me grounds to shoot this fight as reliably as possible”, said Igor Ugolnikov.

The project is actively supported by the legendary hockey player and State Duma deputy Vyacheslav Fetisov.

“We understand that this feat was for some reason forgotten or not so spoken of. Or not given the value in its time. I do not know why, but we’ll find out. Why 3.5 thousand children were less important than 28?”, asked Vyacheslav Fetisov.

Filming will begin exactly one year later, and today Igor Ugolnikov announced the start of the casting. To get into the film there is a chance for Podolsk youth. You can apply on our website.

Here he came to a meeting with Obninsk schoolchildren to teach them a real lesson of peace.

Many people remember this man, thanks to the popular “Oba-na” show in the 1990s.

And very few people know what Ugolnikov is doing today. In fact, he changed the role of the clown to the producer image a long time ago. Under his aegis, such famous films as “Battalion” and “Brest Fortress” were released.

Within the framework of the meeting, Igor Ugolnikov told Obninsk youth about how the shooting of films about the war took place, shared his thoughts on military actions, which, unfortunately, is so rich in our history, and also talked about the main producer plans for the near future.

Already next year in the Kaluga region the shooting of his new film will begin. The film is dedicated to the feat of Podolsk cadets. The main sites, as Ugolnikov himself explained, will be Obninsk and Medyn. By the way, not only professional actors, but also schoolchildren of the first science city, will be able to try for a role in the film.

Currently, the script is being prepared. The film set will begin its work in February 2018. 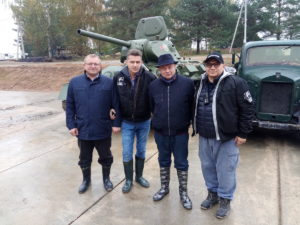 06.10.2018
The governor of the Kaluga region, Anatoly Artamonov, visited the cinema complex of the studio “Voenfilm”
Learn More 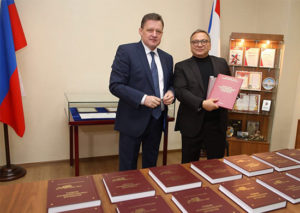 25.09.2017
A meeting with representatives of the “Last Frontier” initiative group at the Central Archive of the Ministry of Defense of Russia
Learn More
Got information?
If you have information about the exploits of the Podolsk cadets, write to us
Write a letter