May 11 in the Russian pavilion at the 71st Cannes International Film Festival and the film market, a presentation of the studio “VOENFILM” and its film projects was held.

At the beginning of the presentation the head and one of the founders of the studio Igor Ugolnikov spoke about the capabilities and potential of the studio: a unique collection of military equipment of different years (from mortars to aircrafts), cold and firearms, military uniforms and props. He stated that the studio can become a technical base to create a military film project of any scale.

Special interest of the guests of the Russian pavilion and the press was caused by the presentation of “VOENFILM” upcoming projects.

The closest studio project is a film about the feat of Podolsk cadets in October 1941 near Moscow – “Last Frontier”.

“We would like to make a film worthy of such films as “They Fought for Their Country”, “Only Old Men Are Going to Battle”, “Officers”… This is not a propagandistic idea, I would like the world to see the feat of Russian guys… The history of Podolsk cadets is amazing, but, unfortunately, very little is known about it. We studied unique documents from the Ministry of Defense, got a list of names of all those guys and know about many of them. While shooting the “Brest Fortress” and “Battalion” we aimed for maximum reliability, but the main concern was to make the viewer sympathize our heroes and intuitively put himself in their place – what would I do now? This is how we plan to shoot a story about the unprecedented exploit of Podolsk cadets”, – said the general producer of the film Igor Ugolnikov.

Present at the presentation, Alexei Guskov, who will play one of the main roles in the film, told about what interested him in the project: “Actors often jokingly call the script on military topics the “history in boots”. There are many war stories, but this film is special. There is metaphysics in it, it speaks about hostages of honor – I really wanted to play such a man. Moreover, Igor Ugolnikov is doing this project with incredible meticulousness and love”.

The second project, presented by the film studio “VOENFILM” was a picture about the events unfolding in the village of Mikhailovskoye, the museum-estate of A.S. Pushkin in 1943-1944, titled “Saving Pushkin”.

“Only after making such films as “Brest Fortress” and “Battalion” we got the moral right to start creating such a complex and controversial project about war as “Saving Pushkin”. But I assure you that this film is also about the love for the Motherland, the native culture, the native land” – said the creative producer of the picture Eugeny Ayzikovich.

The presentation of “VOENFILM” projects, which will be released interationally under the titles “Last Frontier. They fought for Moscow“ and “Saving Pushkin“, aroused the interest of Russian and foreign partners, in particular, the offers came from film studios and production centers of Germany, the Czech Republic, Serbia and the CIS countries.

Finishing the presentation of his projects, Igor Ugolnikov expressed gratitude to ROSKINO: “I would like to say a big thank you to ROSKINO and Ekaterina Mtsituridze for the opportunity to present our new projects in the pavilion. All previous projects, which received 112 prizes at international film festivals, began to advance in the ROSKINO pavilion in Cannes. We are hoping for further fruitful cooperation”.

The film project is dedicated to the feat of Podolsk cadets in October 1941 near Moscow. Cadets of the Podolsk artillery and infantry schools receive orders to take up defense at the Ilinsky boundary and to restrain along with the regular units of the 43rd Army against the fascist invaders, until reinforcements come up. Yesterday’s boys, dying, help to restrain the many times exceeding the strength of the Germans and for twelve days become an obstacle for the enemy on the way to Moscow…

The film is not just about war, it is a film about love, real friendship and about how boys become real men.

Nearly three and a half thousand cadets of two Podolsk schools and their commanders were sent to the last line before Moscow… Most of them remained on the frontier forever.

Mikhailovskoe village. Museum-Estate of Pushkin. A place where everything reminds of the great poet. The fascists occupied Mikhailovskoe at the very beginning of the war. The poetic environment and familiarity with Pushkin’s creativity do not prevent them from staging demonstrative executions of civilians… Some of the locals became partisans, some cooperate with the invaders. There are those who hope to wait without choosing a side. One of those is the rural “southpaw” Sergei.

Frau Schiller, a professor of literature from Germany, a specialist in Pushkin’s creative work, comes to Pushkin’s village. She gets acquainted with the environment, conducts excursions for Wehrmacht soldiers and local peasants, telling them about the great Russian poet. Sergei and Frau Maria find salvation from the war in Pushkin’s poetry and in each other…

Soon an order comes from Berlin – to take all the historical values ​​from Mikhailovskoe. Sergei decides at all costs to save the property of his country… 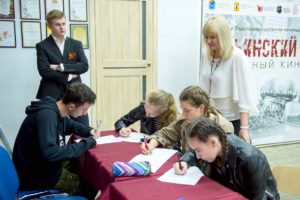 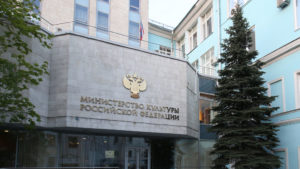 26.05.2018
“Last Frontier” – The Ministry of Culture pitching participant
Learn More
Got information?
If you have information about the exploits of the Podolsk cadets, write to us
Write a letter