22.02.2018
In Obninsk Igor Ugolnikov showed the layout of the set, costumes for the film and read the main scenes of the script
All news

Preparation for the film about the heroic deed of the defenders of the Ilyinsky line is going on by leaps and bounds. And, of course, one of the most important stages is the creation of a script for the film. The CEO of the studio “Voenfilm” and the general producer of the film Igor Ugolnikov at a meeting in Obninsk with the leaders of the regional and local authorities, businesses, military units, activists of the national film project said that by now the script is almost ready, although some scenes need some refinement.

The meeting itself was timed to the solemn date of the 100th anniversary of the creation of the Red Army. The succession of the generations, the memory of the deeds of the fathers was spoken by Irina Babakova, the deputy head of the administration of Podolsk, the granddaughter of Lieutenant Afanasy Aleshkin, the commander of the 4th battery of the Podolsk artillery school, who was at the head of the Podolsk delegation. At the meeting there were two more descendants of cadets – grandson of Strelbitsky – Pavel Medvedkov and grandson of Smirnov – Dmitry Smirnov. All three met together for the first time and unanimously expressed their interest in the successful implementation of a truthful feature film.

Deputy Governor Nikolai Kalinichev at the meeting with the participants of the national film project confirmed the readiness to support its implementation in every possible way. The Mayor of Obninsk, Vladislav Shapsha, spoke about the high educational significance of the film project for the younger generation. And the head of the administration of the Maloyaroslavets district, Alexei Ivanov, promised that the district would render effective assistance to the project.

Igor Ugolnikov read several important scenes that reveal the characters of the protagonists, and told about the movie ending. Everyone listened with bated breath. It is this end of the picture about the heroism of the cadets that shows the invincibility of our Motherland.

Another point about which one can not but say: how will the Germans be shown in the film? “We’ll show the Fascists only through the eyes of the cadets”, Ugolnikov said. This is an indispensable condition that will be adhered to during filming.

The general producer also outlined the most important rules that guide the filmmakers: the maximum reliability of events. Archives are being raised, circumstances that have never been covered before are being clarified. For example, we discovered the last fight circuit from October 16, 1941, which marked all Nazi tanks and indicate where they were conducted by the fire. This was taken into account when creating the layout, which was made by the famous art director Konstantin Pakhotin. During the presentation, a special camera moved through the layout, and the picture was shown on the screen. It looked very real.

The film set itself is located in the Medyn district, now it is also undergoing preparatory work. Not only are the pillboxes built and a bridge is built across the river. Ancillary facilities are needed – hangars for equipment, dining room, the place where the camera crew will be. There are moments that a person who is not familiar with the demands of a military filmmaker will not come to mind. For example, the route along which the tanks will move should be of increased strength so that heavy equipment can move.

Before the audience, the future actors of the film, those guys who had already been casted for the role of Podolsk cadets, appeared. They showed the costumes for the film: the uniform of the cadets of the Podolsky Infantry School and the Podolsky Artillery School, as well as the uniform of the artillery lieutenant. Some children are pupils of the Podolsk school №18, which is named after Podolsk cadets, others are already students. Such as Nikita Samoylov from Obninsk, for example. It turns out that his photo was sent to the site of the national film project, when he was in the army, and for him it was a happy surprise that his “type” came up for the movie. Cadets will played by the guys of the same age as their heroes. As for the “adult” heroes – Colonel Alexander Naumov, Major-General Vasily Smirnov, Colonel Ivan Strelbitsky, Captain Ivan Starchak, Lieutenant Afanasy Aleshkin – professional actors are required here, but so far no one has been approved for these roles.

Governor of the Kaluga region Anatoly Artamonov emphasizes the importance of the national film project “Last Frontier” not only for the region, but for the entire country. The day before, he gave a positive assessment of the state of work and confirmed his willingness to fully support the implementation of the people’s project. And at the very meeting a very touching event happened: money, which the pupils of the 18th school of the city of Podolsk collected at a charity fair, were sent to the general “piggy bank” for the film,. The support of the national film project goes on all levels: there are no indifferent to the immortal feat of the heroes of the Ilyinsky frontier. 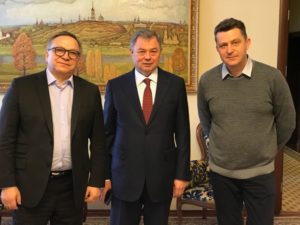 21.02.2018
Governor Anatoly Artamonov stressed the importancy of the national film project at a meeting with Igor Ugolnikov and Vadim Zadorozhny
Learn More

18.03.2018
The Russian Federation President election
Learn More
Got information?
If you have information about the exploits of the Podolsk cadets, write to us
Write a letter