State Duma deputy Vyacheslav Fetisov and the CEO of the film studio “Voenfilm” Igor Ugolnikov voted on March 18 in the City District of Podolsk at polling stations in Lyceum №1, 2/24 Bolshaya Serpukhovskaya st.

“This is the duty of every citizen”, said Vyacheslav Alexandrovich. – But at the same time, it is very important for our country to unite all citizens, we came to the polling stations on March 18 as a team. I came to vote in Podolsk, because I myself was elected to the State Duma here. Residents gave me confidence, today on this important day I’m together with them!

Vyacheslav Fetisov noted that shortly before the presidential elections he held many meetings with voters, during which the situation in world politics, economics, as well as the life of modern Russia was discussed.

“There are problems, but only modern people who have experience, know their business, understand how to build strategy and tactics”, Vyacheslav Fetisov said.

Igor Ugolnikov told reporters that he votes for stability and prosperity for Russia:

“I understand how important this day is for every citizen of the country”, said Igor Stanislavovich. – I serve the Fatherland on the ideological front, I am engaged in patriotic education and preservation of our historical roots. A new film about the feat of Podolsk cadets, which we will shoot in 2018 – this is my little battle for the future. This is a film for our children, so they remember the feat done by their ancestors.

After voting, Vyacheslav Fetisov and Igor Ugolnikov made an excursion around the Lyceum and held a creative meeting with the residents of the district. During the meeting they told about the preparations for the shooting of the feature film “Last Frontier”. Note that the building of the lyceum, where the voting and meeting took place, was built in 1912 with the financial support of the management of the plant “Singer”, which produced famous sewing machines. It is a monument of urban planning and architecture. Among graduates of the lyceum there are six Podolsk cadets, which the film will be about. 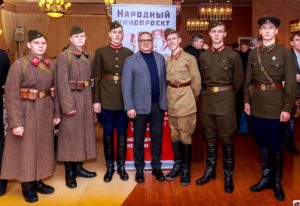 22.02.2018
In Obninsk Igor Ugolnikov showed the layout of the set, costumes for the film and read the main scenes of the script
Learn More

26.03.2018
The Kaluga region will take part in the creation of a national film project dedicated to the exploit of Podolsk cadets
Learn More
Got information?
If you have information about the exploits of the Podolsk cadets, write to us
Write a letter